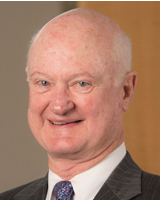 Jim O’Mara practices in the area of business with a focus on bankruptcy and creditors’ rights, loan workouts, secured lending, commercial litigation and business transactions.

In bankruptcy, we have acted as debtor’s counsel and committee counsel and have represented numerous secured and unsecured creditors. Most recently, we have acted as debtor’s counsel in the Chapter 11 filing of a regional grocery chain, one of the largest privately held companies in the United States. From the creditor’s side, we provide counseling and representation to financial institutions and other parties doing business with financially distressed companies, as well as with bankruptcy trustees and debtors-in-possession. Our representation of creditors has included representing numerous corporate and individual clients in the largest fraudulent conveyance action ever filed in the State of Louisiana, consisting of claims in excess of $100 million. We also represent non-creditors whose rights have been affected by an associated bankruptcy filing, including insurance companies and reinsurers.