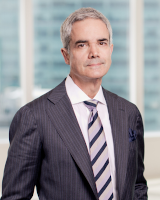 John J. Rapisardi, Chair of the Firm’s Global Restructuring Practice, has 38 years of domestic and international debtor and creditor restructuring experience across a variety of industries, including automotive, chemical, environmental, health care, energy, gaming, retail, real estate, municipal, satellite, sports franchises, textile and telecommunications. John has been engaged as an advisor in several major governmental representations, including President Obama’s Auto Task Force in the restructuring of General Motors and Chrysler. Because the strategies John put in place through credit bidding under Section 363 of the US Bankruptcy Code, the automakers were able to successfully emerge from chapter 11 in 42 and 40 days respectively. In addition, John represented the People’s Republic of China in the drafting of its new bankruptcy law, and the Governor of California in the PG&E chapter 11 case.

Currently, John is leading O’Melveny’s ongoing representation of the Government of Puerto Rico with respect to all aspects of the financial restructuring of Puerto Rico’s debt obligations — marking the largest municipal restructuring in recent history. And at the height of the 2008 Economic Crisis, John served as lead debtor counsel for LyondellBasell, one of the world’s largest petro chemical producers with subsidiaries across the world, which emerged from chapter 11 within 15 months. He advised in every aspect of its bankruptcy restructuring of more than US$ 25 billion in debt.

Consistently recognized as one of the leading restructuring lawyers in the US, Chambers USA has recently described John as a “tremendous lawyer” who is “well regarded in the industry” and praises his approach to both company and creditor-side transactions as “very measured, smart, diligent and thoughtful.” For his representation of the US Treasury Department in the Chrysler, General Motors and Delphi restructuring, Chambers USA described John as a “go-to attorney on behalf of the US Treasury.”

This past year he received the “Distinguished Leader” award from New York Law Journal.  Similarly US Legal 500 has continually named John among their Elite Leading Lawyers and noted that he is “a superb tactician,” “a first rate restructuring lawyer – he combines knowledge of the law with the correct demeanor necessary to press his client’s agenda without allowing his ego to interfere with success,” and a “very smart, strategic thinker.”  He was recently named in Who’s Who Legal: Thought Leaders – Restructuring & Insolvency 2018, noting “he is reputed as one of the best in the business.” The Best Lawyers in America also has continually selected John as a leading lawyer in Bankruptcy and Creditor-Debtor Rights, Insolvency and Reorganization, Bankruptcy Litigation. John is a member of the American College of Bankruptcy (ACB), an honorary professional and educational association of tenured and highly regarded bankruptcy and insolvency professionals.

John has written extensively on the subject of lender rights and remedies under the new Chinese Bankruptcy Code. John is co-author of The PRC Enterprise Bankruptcy Law: The People’s Work in Progress (Beard Group, Inc., 2008) and for the past eighteen years, has been a regular bankruptcy columnist for the New York Law Journal. John has also written and lectured extensively on the key aspects of the Brazilian bankruptcy code and its impact on US investors.

John has been the featured bankruptcy columnist for the New York Law Journal for the last 25 years. He has authored or co-authored over 100 articles, and has written and lectured extensively on a wide swath of bankruptcy and restructuring topics.

With some of the world’s leading insolvency lawyers, O’Melveny helps clients face virtually any aspect of a restructuring matter—whether it be a company facing financial distress, significant creditors of a troubled company or an investor looking for the opportunity to purchase a distressed business or certain of its assets.

Our restructuring lawyers, many of whom are also experienced litigators, have played a leadership role in a number of the largest and highest profile restructuring matters in recent years, including the ongoing financial restructuring of Puerto Rico with more than US$70 billion of debt and the bankruptcies of Verso, Energy Future Holdings, LINN Energy, Homer City Generation, Colt Defense, Cal Dive International, Peabody Energy, Hancock Fabrics, New Century Financial, Dynegy,General Motors, and Chrysler. Our clients, which include some of the most well known names in finance, turn to O’Melveny in their most challenging times and when the stakes are at their highest. The reason is simple: for nearly a century O’Melveny has employed exceptional creativity and vigorous advocacy to preserve and maximize economic value for clients across industries and borders.

Our restructuring team has broad experience representing the full panoply of participants in bankruptcies and out-of-court restructurings. They include:

Given the complexity of the issues our clients face, we also draw on the firm’s finance, capital markets, M&A, tax, labor, and litigation specialists to ensure all of our clients’ interests are met.