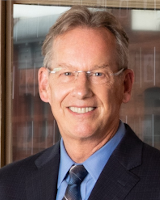 As the leader of the firm’s Bankruptcy practice group, John provides strategic, general business planning and dispute resolution assistance to a wide range of companies and their owners. He is nationally recognized for his commercial bankruptcy and creditors’ rights skills and also focuses on providing advice concerning potential or actual insolvency proceedings, including receiverships, forbearance negotiations and related litigation. John also cochairs the firm’s Agriculture industry group, focusing primarily on the needs of agricultural lenders with accounts affected by threatened or actual insolvency. Together with CH&’s litigation, corporate finance, banking, insurance and real estate attorneys, he is able to provide comprehensive solutions for commercial insolvency, recovery and restructuring matters. John distills complicated situations so that they are digestible to his clients, allowing them to efficiently make decisions to get their businesses back on track.

John is certified by the Hudson Institute of Coaching and utilizes his deep understanding of business to provide executive and leadership coaching and facilitation services under the firm’s subsidiary, Pioneer Square Solutions. A frequent mediator of commercial disputes, he is known for his ability to offer creative solutions to resolve expensive disagreements and litigation. John earned the prestigious “Lawyer of the Year” award in Litigation-Bankruptcy by Best Lawyers in 2022. Only one lawyer per year receives “Lawyer of the Year” recognition for each practice area. John is a leader in his field and speaks frequently at local, regional and national conferences and events.

Cairncross & Hempelmann’s Bankruptcy & Creditors’ Rights practice stands apart as a recognized leader in the Pacific Northwest.  Our team is renowned for its experience, expertise, and ability not only to react deftly to financial urgencies but also to prepare clients to avoid them altogether.  Additionally, as part of a full-service law firm, we are able to assemble integrated, project-specific teams tapping into deep experience from other practice groups.

We represent creditors, including financial institutions, landlords, pension funds, small to mid-sized private lenders, as well as commercial debtors, creditors’ committees, receivers, strategic buyers, and other companies and their owners from a wide range of industry groups.